The collection will occur on October 20, making it NASA’s first spacecraft to collect a sample from an asteroid and return it to Earth.

The OSIRIS-REx will leave Bennu in 2021 and return to Earth in September 2023 carrying about 30 sugar packets worth of material from the asteroid.

Since arriving in December 2018, NASA’s OSIRIS-REx mission has been orbiting the asteroid and mapping its surface.

Bennu is 179 million miles from Earth, but it’s considered a near-Earth asteroid. The asteroid could pass close to Earth, closer than the moon, in 2135, with even closer approaches possible in 2175 and 2195. A direct hit is unlikely, but the data gathered during this mission can help determine the best ways to deflect near-Earth asteroids.

The samples from Bennu could help scientists understand not only more about asteroids that could impact Earth but also about how planets formed and life began.

On Tuesday, the spacecraft worked through its TAG, or Touch-and-Go sequence, which is how it will collect samples from the asteroid.

OSIRIS-REx practiced its sampling sequence about 131 feet above the selected site on Bennu, called
Nightingale. The site is inside a crater on the asteroid’s northern hemisphere. Then, OSIRIS-REx backed away from the site. 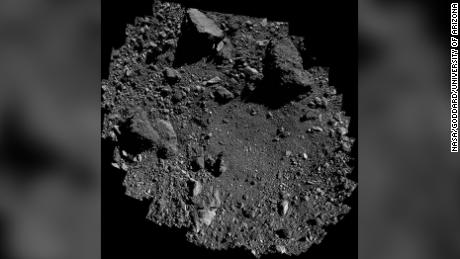 This rehearsal took about four hours to complete as it worked through three of the four maneuvers that will be required to collect a sample.

Essentially, the spacecraft had to conduct burns, or fire its thrusters, to get closer to the surface of the asteroid’s surface — leaving its orbit 0.6 miles away from the asteroid. 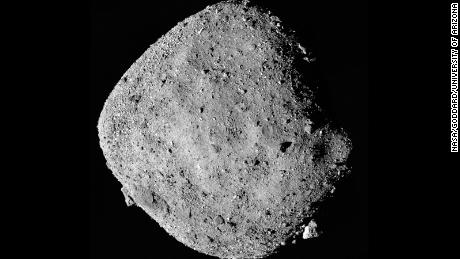 Then, it performed a “Checkpoint” burn at 410 feet away. During this maneuver, OSIRIS-Rex can autonomously check its position and velocity to see if it needs to make any adjustments before it moves closer to the asteroid.

OSIRIS-REx then achieved its “Matchpoint” burn, where the spacecraft matches the asteroid’s rotation so it can fly above the sample site. 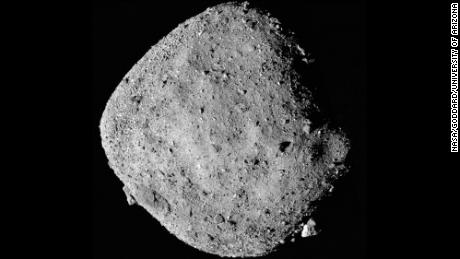 This put the spacecraft closer than it has ever been to the asteroid’s surface, at 131 feet away. During this close encounter, OSIRIS-REx unfolded its Touch-and-Go-Sample Acquisition Mechanism, or sampling arm to test it in the configuration it will use in October.

This guidance system allows OSIRIS-REx to use its on-board hazard map and avoid areas that could cause harm to the spacecraft. The planned trajectory to reach and sample the Nightingale site shows that a safe touchdown will be possible in October. 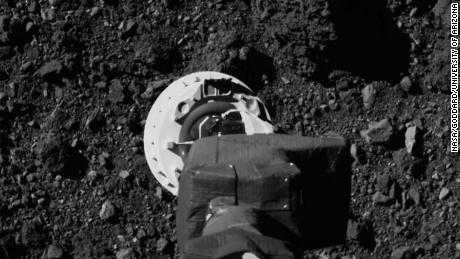 Given the distance of the spacecraft from Earth, it takes about 16 minutes for a signal sent from Earth to reach OSIRIS-REx. So commands will be sent ahead of time to the spacecraft, as well as a command to commence this sequence, in October. The team tested this capability during the rehearsal.

The mission team also used this rehearsal as an opportunity to make sure the spacecraft’s systems were operating normally.

“Many important systems were exercised during this rehearsal — from communications, spacecraft thrusters, and most importantly, the onboard Natural Feature Tracking guidance system and hazard map,” said OSIRIS-REx principal investigator Dante Lauretta, a professor of planetary science and cosmochemistry at the University of Arizona, in a statement.

“Now that we’ve completed this milestone, we are confident in finalizing the procedures for the TAG event. This rehearsal confirmed that the team and all of the spacecraft’s systems are ready to collect a sample in October.”

While much of the team worked remotely, a limited amount of team members were on-site at Lockheed Martin’s Space facility, NASA’s Goddard Space Flight Center and the University of Arizona and practicing health and safety precautions amid the ongoing pandemic. 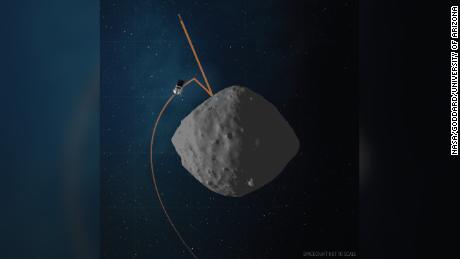 In October, the spacecraft will actually reach the asteroid’s surface and use its sampling arm to touch down for five seconds. It will release a pressurized charge of nitrogen to disturb the surface of the asteroid and collect samples from that material. Then, it will back away and return the samples to Earth on September 24, 2023.

Another mission, Japan’s
Hayabusa-2, has collected samples from the asteroid Ryugu — which
could have come from the same parent body as Bennu — and is already
on its way back to Earth. Samples are expected back by December 2020.

What we know so far

Since arriving at Bennu in 2018, OSIRIS-REx has revealed intriguing information about the asteroid.

Bennu is covered in boulders rather than the large areas of fine-grain material that scientists expected. 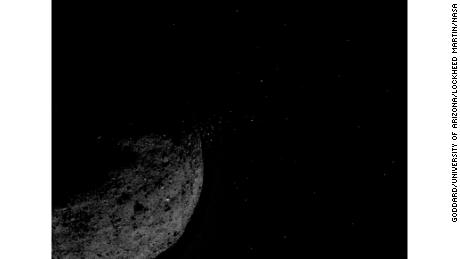 Bennu is the smallest body to ever be orbited by a spacecraft, just a little bit wider than the height of the Empire State Building, according to NASA. Bennu has a shape comparable to that of a spinning top, and it’s a “rubble pile” asteroid, which is a grouping of rocks held together by gravity rather than a single object.

OSIRIS-REx’s instruments have confirmed that hydrated minerals, including magnetite, are abundant and widespread on the asteroid. The asteroid is full of valuable materials that may even contain clues about how life began. Bennu is essentially a leftover from the formation of our solar system billions of years ago.

Early in the mission, the spacecraft observed
unexpected plumes of material ejecting from the asteroid into space.

Bennu probably originated in the main asteroid belt, having broken off of a larger asteroid in the belt between Mars and Jupiter a couple of billion years ago. This knocked it through space until an orbit close to Earth locked it in place.