Alphabet‘s (NASDAQ:GOOG)(NASDAQ:GOOGL) key Google subsidiary is assisting — in its own way — with fighting the wildfires currently ravaging California. On Thursday, Google announced in an official blog post written by Vice President of Engineering and Crisis Response global lead Yossi Matias that it has added features to its Maps and Search services to help users track the location and severity of the fires.

The new features were launched on Thursday.

This information is presented in graphic form in Google Maps, with boundaries outlined in red. The data comes from the National Oceanic and Atmospheric Administration’s GOES fleet of satellites, and Google Earth’s analytical systems then process it. In the post, Matias said that this combination provides near real-time accuracy, with the data being refreshed approximately once per hour. 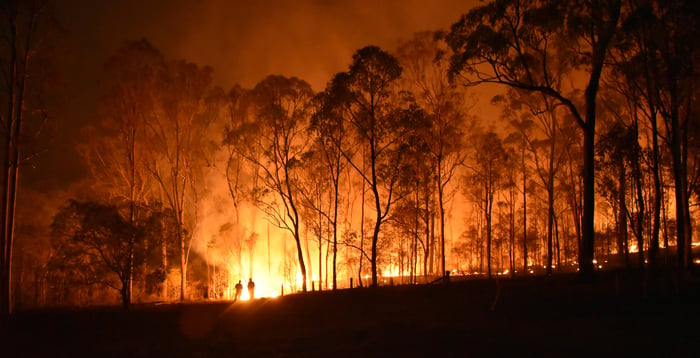 “In moments like a growing wildfire, knowing exactly where a blaze is underway and how to avoid it is critical,” Matias wrote. “Using satellite data to create a wildfire boundary map, people will now see the approximate size and location right on their phone or desktop.”

The move comes as Google and Alphabet’s home state of California copes with an unprecedented number of wildfires, some not far from the two companies’ headquarters in the town of Mountain View. Over 90 such fires have been reported, and evacuations from areas nearby have commenced.

In the summer months, many regions of California are particularly susceptible to wildfires due to the combination of dry terrain and high heat. Record-breaking temperatures this summer have exacerbated the risk, as have a series of recent lightning strikes.

Both classes of Alphabet’s shares rose by just over 2% on Thursday, well eclipsing the gains recorded by the major stock market indexes.