While compatibility with wireless Android Auto is expanding on phones, there are still many in-car head units and media players that are stuck using tethered connections. That’s where a device called ‘AAWireless’ comes in, which aims to add wireless support to as many Android Auto units as possible.

The AAWireless device is being developed by Emil Borconi-Szedressy, who designed the original concept using a secondary phone (and has several published Android Auto applications), and Chiel Prins, who helped create the newer custom hardware and Linux-based software. The adapter plugs into the car over USB and creates a wireless signal to use Android Auto with, eliminating the need for a cable between your phone and the car.

The development team says it has tested AAWireless on as many cars and units as possible, though there’s always the possibility that some units may never be compatible, due to different implementations of Android Auto and the onboard USB connectors. The smartphone application also requires Android 9 Pie or higher.

The project is seeking $220,000 on Indiegogo to manufacture custom boards and create an industrial design for the casing. If you back the project with $55, you’ll get a single AAWireless unit when it starts shipping — the current estimated date is December 2020, but ETAs for crowdfunding campaigns are usually optimistic. You can also give the project $110 to receive two AAWireless devices. 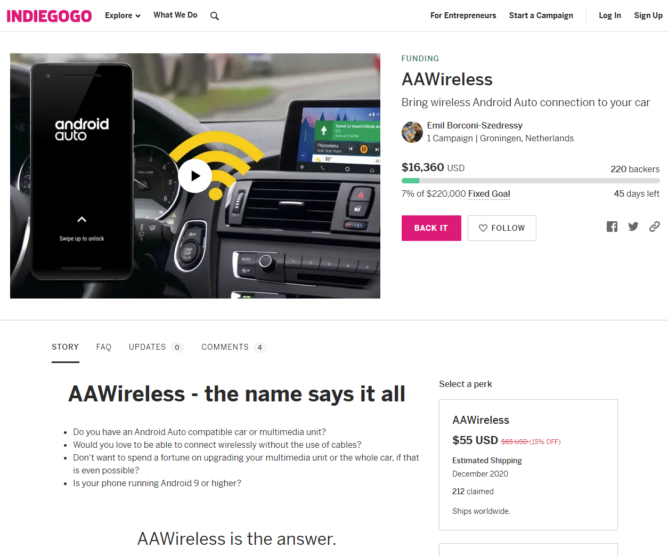 The Indiegogo campaign has now surpassed its initial crowdfunding goal, raising over $350,000 with 42 days still left to go. The option to purchase two AAWireless units at a discounted rate has sold out, but you can still get the single unit option for $55. Emil Borconi-Szedressy also said in a project update that the shipping estimate will be pushed to February for late backers:

Perks claimed with December estimated delivery will be delivered in December, however we currently expect to be able to produce around 4000 – 5000 units / month, which means committing to more perks by December we risk not being able to keep our promise and I do not want that.

He also published a list of cars that have been confirmed to work, which you can check from the Indiegogo updates page.