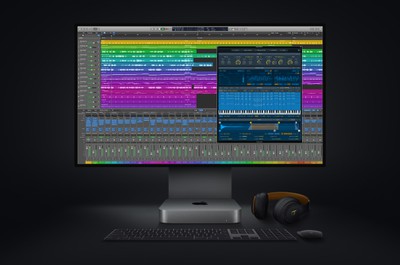 Tulupov used a mix of external displays, ranging from 4K to 1080p, as the Mac’s Thunderbolt ports do not have the bandwidth to simultaneously run six 4K displays at full resolution. Users would therefore still have to be selective about their external display setup when it comes to resolutions.

In testing, running full-resolution videos across the various displays at the same time as rendering in Final Cut Pro, Tulupov found performance to be “awesome,” with very few frames being dropped. When closing and opening the MacBook Air, the displays behaved as expected, and the setup seems to be more than adequate for daily use.

Tulupov noted that he did not test this setup with Sidecar for the iPad, but it may still be possible to run Sidecar in addition to the external displays for even more screen space.

In a separate video, Tulupov explained how to go about connecting additional external displays to an M1 Mac using a DisplayPort adapter. The process simply involves installing DisplayLink drivers, which are already Big Sur-compatible, and connecting the adapter via USB-C.

The workaround solution may offer a lifeline to users who were disappointed at the M1 Mac’s limited external display capabilities.