Following a slightly convoluted engine testing campaign, Starship SN8 is set to finalize its pre-flight requirements with a triple Raptor Static Fire test on Tuesday. Should this test go to plan, the path will be cleared for SN8 to conduct a test flight to 15 km (50,000 ft) as soon as November 30.

This three-engine firing is expected to be the final major test ahead of the highly-ambitious flight, controlled “belly flop” return, and potential landing.

The first-ever triple Raptor test was conducted over a month ago, albeit shortly after SN8 had taken up residence on the launch mount. The path towards flight was always going to involve additional first-time milestones. 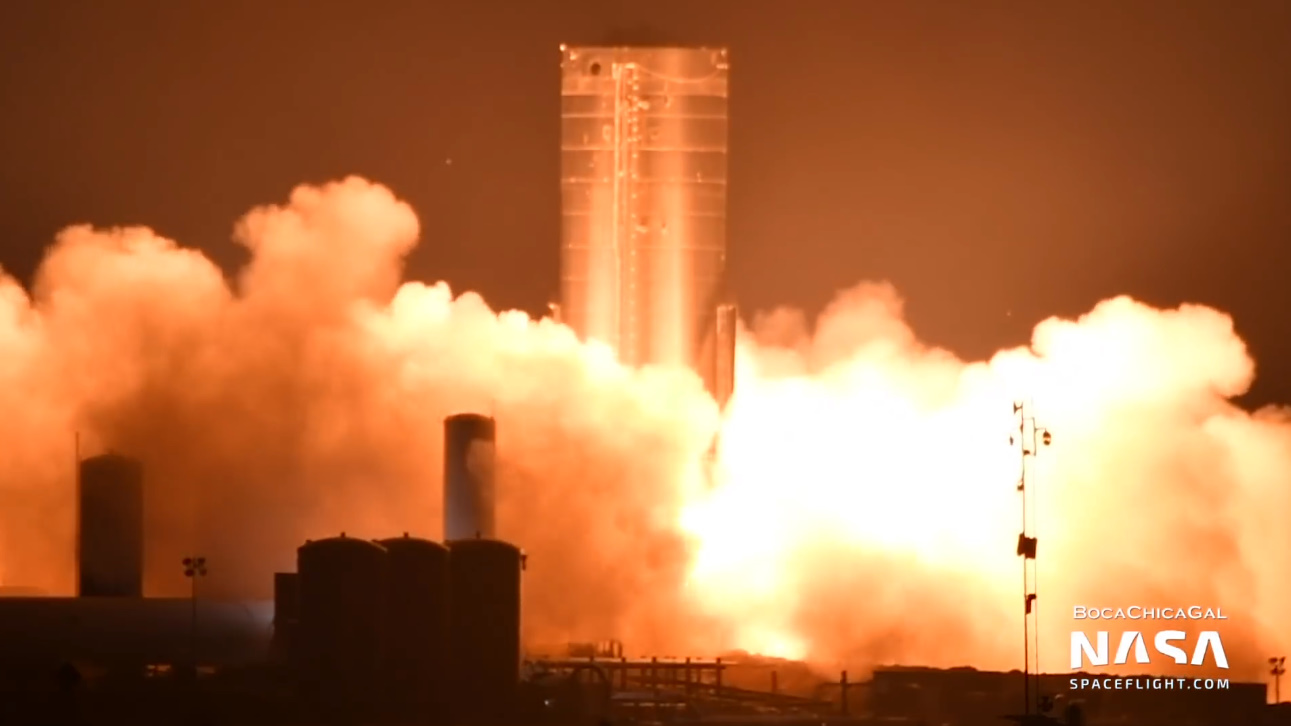 Firstly, a second triple Raptor firing was added to forward planning due to an engine swap conducted after the initial test.

After that first test with Raptors SN30, SN32, and SN39, engineers then uninstalled SN39, replacing it with SN36. From that moment, an additional three-engine firing was going to be required.

However, that was added to the end of SN8’s testing milestones. The decision was taken to progress towards nosecone installation to allow for two tests (single and dual engine) utilizing the liquid oxygen, or LOX, Header Tank located at the tip of the nose.

The first Header Tank Static Fire, involving one Raptor engine, was successfully conducted, although “sparks” were noticeable immediately after ignition. The debris was initially understood to be surface material instead of a problem with the engine – the latter confirmed by the push toward the second Header Tank test without an engine swap.

The second test involved two Raptors, again kicking up a firework display from the pad surface. However, this time, some of the pad surface debris managed to damage one of the engines (SN32) – visible on the NSF Livestream as a stream of molten liquid spewing from the engine nozzle seconds after shutdown.

This almost became a serious issue for Starship SN8, with a loss of pneumatics impacting the vehicle’s ability to release pressure. Thankfully, the rising pressure in the LOX Header Tank was released by a burst disk and the rest of the vehicle detanked without issue.

Since this test, Raptor SN32 was removed and replaced by the newly-arrived SN42, the header tank burst disk has been replaced, and the pad surface has had a fresh coating ahead of the Static Fire test and launch attempt.

With the November 30 target date becoming public for the test flight, all eyes were on the roadblock notifications and notices to locals when the Static Fire test would take place as a prelude to flight. Initially, this was looking to target Wednesday before being advanced to Tuesday.

SpaceX is understood to be conducting a Flight Readiness Review (FRR) for the test flight, with this final Static Fire test providing key data to the final go to proceed towards SN8’s big day.

Elon Musk has already calibrated public expectations on the expected outcome of SN8’s test, noting that “understanding exactly how the body flaps control pitch, yaw & roll during descent, such that the ship is positioned well to relight, flip & land, would be a big win.” As opposed to expecting SN8 to land feet first on the landing pad.

However, such calibrations have been cited before, such as when Elon claimed he was worried Falcon Heavy’s maiden flight risked a failure at launch, envisioning a wheel from the onboard Tesla Roadster rolling down the crawlerway in the aftermath. Of course, Falcon Heavy’s first trip into space was a success.

SN8’s test, however, is extremely challenging, to the point its conclusion with a successful landing would far exceed many’s wildest dreams.

Proof that the expectations aren’t being dramatized can be seen just a short trip down Highway 4, where Starships SN9 is chomping at the bit, ready to take the sacrificial altar in the event of SN8 ending up in the Gulf of Mexico.

Starship SN9 will be hoping to improve on SN8’s performance, gaining a swarth of data from her sister’s test flight, improving the chances of success. This will apply even if SN8 beats the odds and nails the landing. Such “improvements on success” were seen between SN5 and SN6’s 150-meter hops.

SN9 is currently is already at the stage of processing that SN8 enjoyed at the Production Site. However, this time the nosecone is expected to be mated in-situ. SN8’s nosecone mate took place at the launch site.

This may allow for a “cleaner” mate, away from the wide-open launch site’s wind and dust, although the motives may be related to the allowance of space. SN9 is, after all, currently housed in the High Bay – partially to clear space in the Mid Bay but also to provide additional clearance to complete the nosecone mate inside the taller facility.

The Mid Bay, ironically, is already fully occupied with follow-on Starships, with SN10 now in a stacked configuration and SN11 in the process of being stacked. This is yet another sign of SpaceX Boca Chica’s incredible production cadence.

In fact, there’s actually a line of additional Starships holding tickets waiting their turn to enter the Mid Bay. Starship SN12 has all four sections of its main tankage ready for stacking, while Mary (@bocachicagal’s) lens has now spotted parts up to SN15.

While Super Heavy has been in a relative state of pause lately, at least by SpaceX Boca Chica standards, new hardware deliveries continue to truck in by the day. 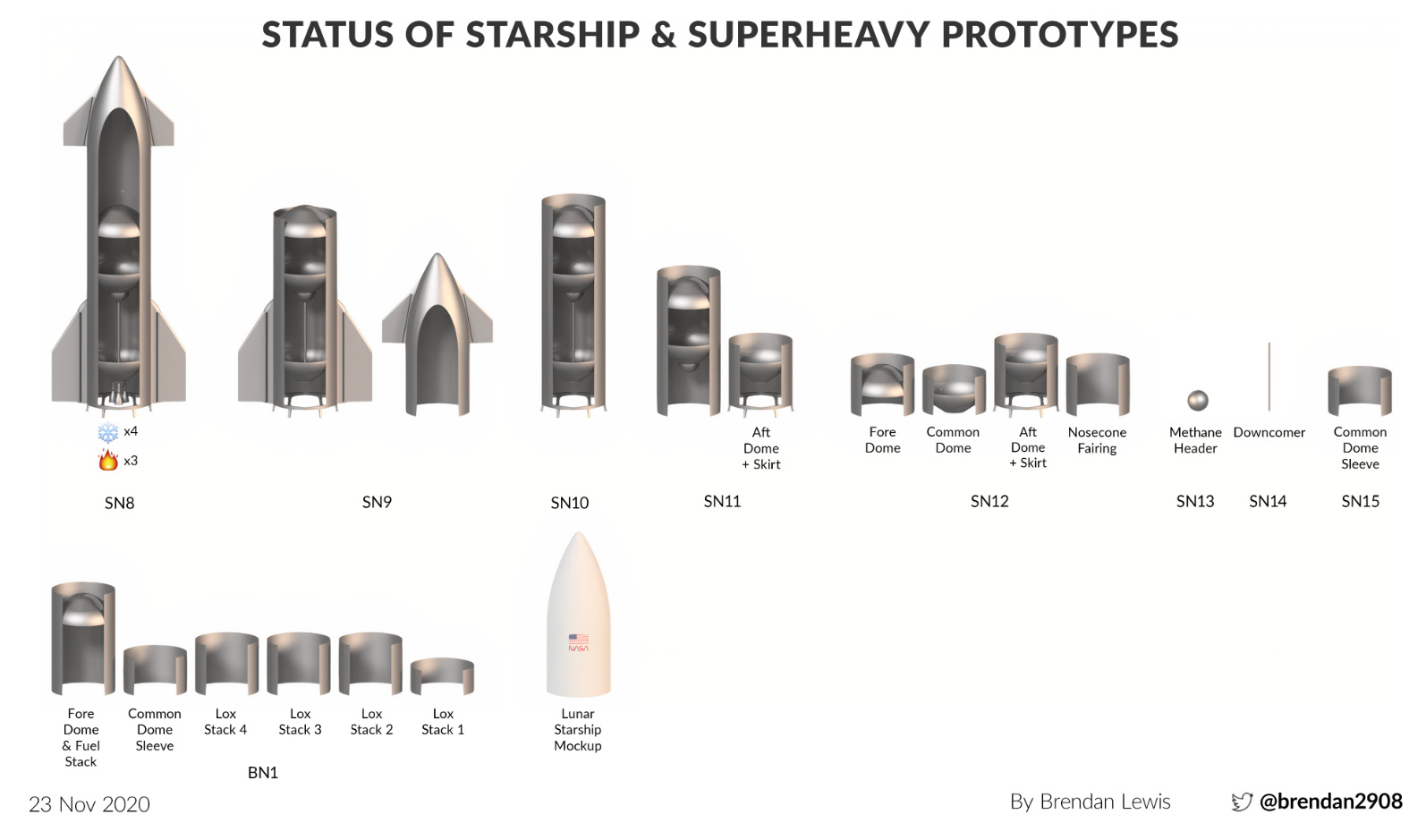 Thankfully, Brendan (@brendan2908) providing a running update via infographics based on what Mary spots – which also included the first sighting of hardware for the illusive SN13.

One of the most interesting items was the arrival of another new Raptor, this time SN44 – which is interesting for several reasons.

Firstly, this engine arrived not long after SN42 turned up in the “RaptorVan” – sporting a pumpkin on its nozzle as a potential friendly message from the McGregor workforce.

Then SN44 arrived – with two Merlin 1D hitchhikers as stablemates – with a Hand Turkey on its nozzle, again likely a Thanksgiving message sent to their fellow SpaceX Texans.

Secondly, this advance through the SN40 range of tested and proven Raptors does point to an increased engine production cadence. With McGregor hosting three test stands, it’s now likely that production and testing are moving through to the SN50 range.

This, in turn, bodes well for fast turnaround in the event of losing a Starship (and its three Raptors), through to the ability to fly numerous Starship prototype missions and cater for the first Super Heavy prototype flight – which will use two or four engines.

Work on the Orbital Launch Mount and associated facilities is ongoing in the shadow of Starship SN8’s preparations for flight. 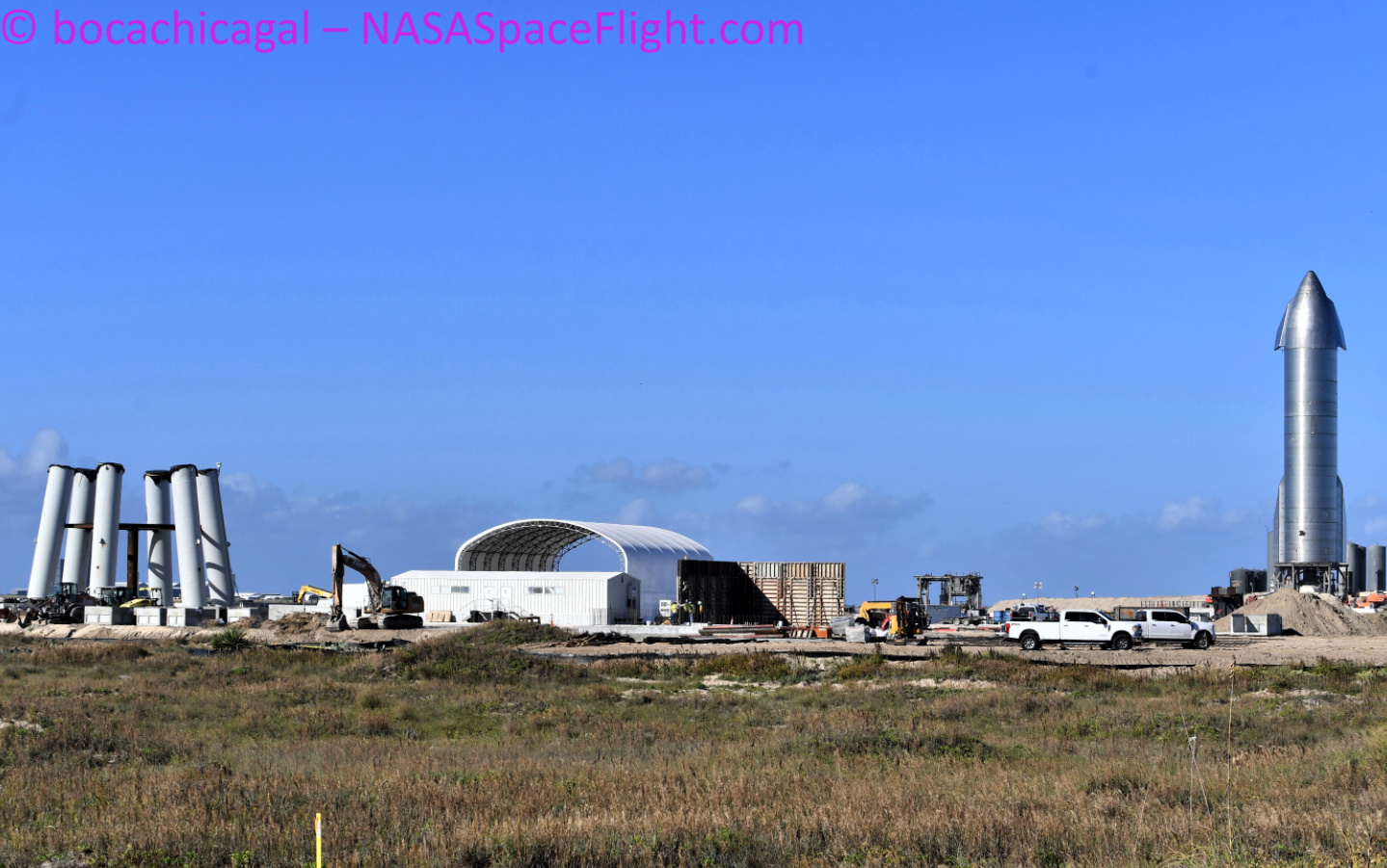 The Orbital Launch Site – via Mary (@bocachicagal) for NSF.

It is becoming obvious that 2021 is lining up to be one of the most ambitious launch vehicle testing campaigns ever seen, with the production capacity to adhere to SpaceX’s “Test, Fly, Fail, Fix” mantra as the company pushes hard to create an operational, fully and rapidly reusable, interplanetary launch system.

Most photos via Mary (@bocachicagal)

Cool gear and the ability to support our content: https://www.nasaspaceflight.com/shop/